September 8, 2021 by Colin Parker in Jobs and Opportunities, News | Leave a comment

Our lab is pleased to announce a postdoc position is now open! The position requires experience in AMO or condensed matter physics, and will work on merging our cesium and lithium systems to build a new quantum simulator. Please see the following link for information on how to apply. You are also welcome to contact Prof. Parker at cparker@gatech.edu.

NOTE: The application system is run by USG and may not work with all browsers. Please don’t let that discourage you, try another browser. (I’ve had luck with Edge and Safari).

Spin Susceptibility Results out in PRL

In a new paper published in Physical Review Letters, we have developed and deployed a novel method to determine the spin susceptibility of ultracold Fermi gases. These gases are created by cooling lithium atoms to less than 1 millionth of a degree Kelvin – a temperature low enough that the dilute gas of atoms takes on many of the same quantum properties as the electron gas found in metals and oxides. It is already established that in these gases, some of the same quantum effects such as superfluidity are possible (for electrons this is called superconductivity because the electrons carry charge, while our lithium atoms do not). However, questions remain about the differences. By applying a combination of radio waves and a magnetic field gradient, we are able to introduce a difference in the population of two spin states, in effect measuring a property known as spin susceptibility, for a variety of temperatures. We found that the changes of spin susceptibility with temperature were surprisingly simple to model, unlike similar changes in material systems, where an anomalous decrease upon cooling is observed, even before the superfluid transition is reached. The figure below shows the trap averaged spin susceptibility compared to the theoretical non-interacting value, as a function of the scaled temperature. For more details check out the paper (link at the top).

We are thrilled to announce that the lab has been awarded the prestigious NSF CAREER Award for work to develop shaken optical lattices with ultracold lithium atoms. Read the press release here: https://cos.gatech.edu/news/colin-parkers-quantum-simulator-receives-nsf-career-award

New Paper in JOSA B

We have a new paper out in the Journal of the Optical Society of America B, about how we process our images to remove interference fringes. Extending the traditional principle component analysis (PCA) method by using a Fourier-filtering method, we achieve better fringe reduction compared to simple PCA. Read about it here: https://doi.org/10.1364/JOSAB.391297.

We’re out in Physical Review A! 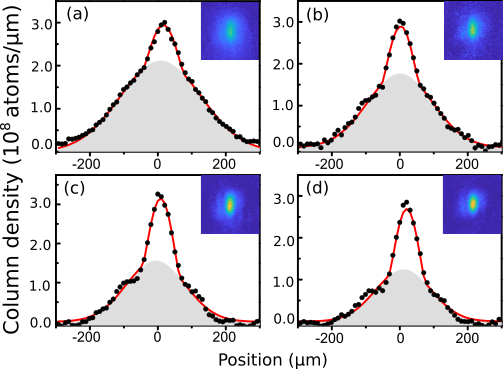 Shown above is a 1D-cut of the density profile (false color image in the inset) of our cold lithium molecules after time-of-flight expansion. The gray fraction shows the thermal expectation, the red line coming above that value indicates the presence of a Bose-Einstein condensate of the molecules. Our little twist on this experiment is to use a mixture where no atom is in the hyperfine ground state (the first and second hyperfine states are used). This mixture is paving the way for another set of experiments we are working on currently… anyhow check it out!

Congratulations to Dr. Yun Long and the lithium team as they are now evaporating ultracold lithium-6 atoms into molecular Bose-Einstein condensates. This unique cold-atom phase starts with our magneto-optical trap (MOT) after which we do gray molasses cooling on the lithium-D1 line. Then, the atoms are loaded into a high power laser beam (similar to so-called optical tweezers), of which the intensity is gradually reduced. As the trap becomes weaker, the hot atoms escape, leaving a lower temperature gas behind. This evaporative cooling process continues until the atoms stick together in molecular pairs similar to nitrogen or oxygen molecules in air (note however, that our molecules are not in the ground state, but are instead quite weakly bound). Finally, when the temperature is low enough, these molecular pairs for the Bose-Einstein condensate, seen above as a sharp increase in the density of atoms with near-zero momentum. The images show (approximately) the momentum distribution of the molecules. The above images contain about 200,000 molecules at various temperatures near 500 nanoKelvin. Using these condensates, we have an exciting array of experiments planned to test correspondence between these cold atoms and electrons in materials with unusual properties. Stay tuned! 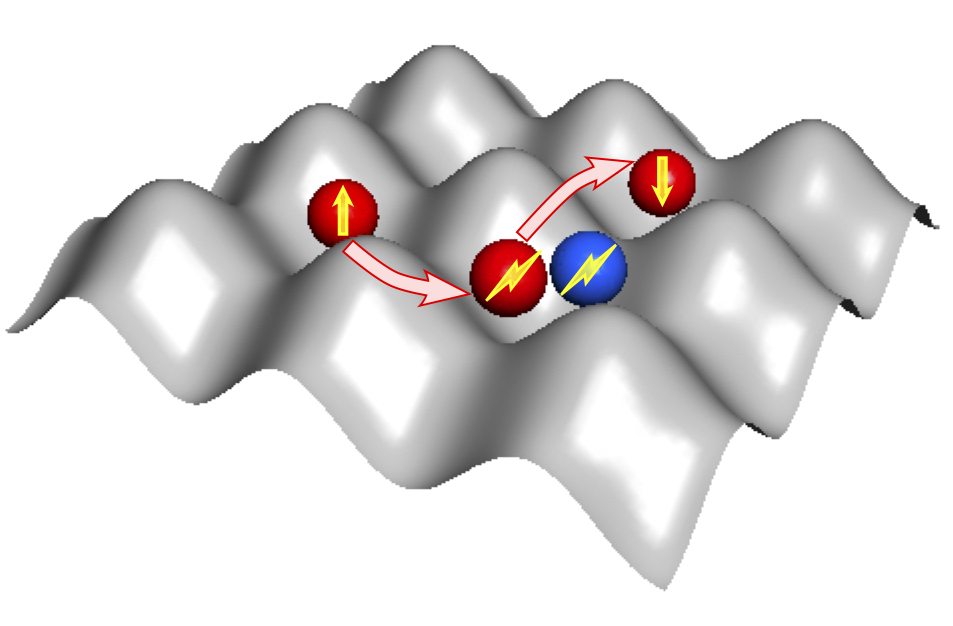 Our group has been awarded the prestigious Young Investigator Program grant from the Air Force Office of Scientific Research. The $450,000 award will be used over three years to investigate the Kondo effect in ultracold gases. Read the press release here (link).

The Parker Lab has now made our first lithium Magneto-Optical Trap. Using six-beams of laser light, we cool lithium-6 atoms to near 1 mK (1/1000 of a degree from absolute zero!). This exciting development is the first step toward realizing our quantum simulations! Congratulations to the team! 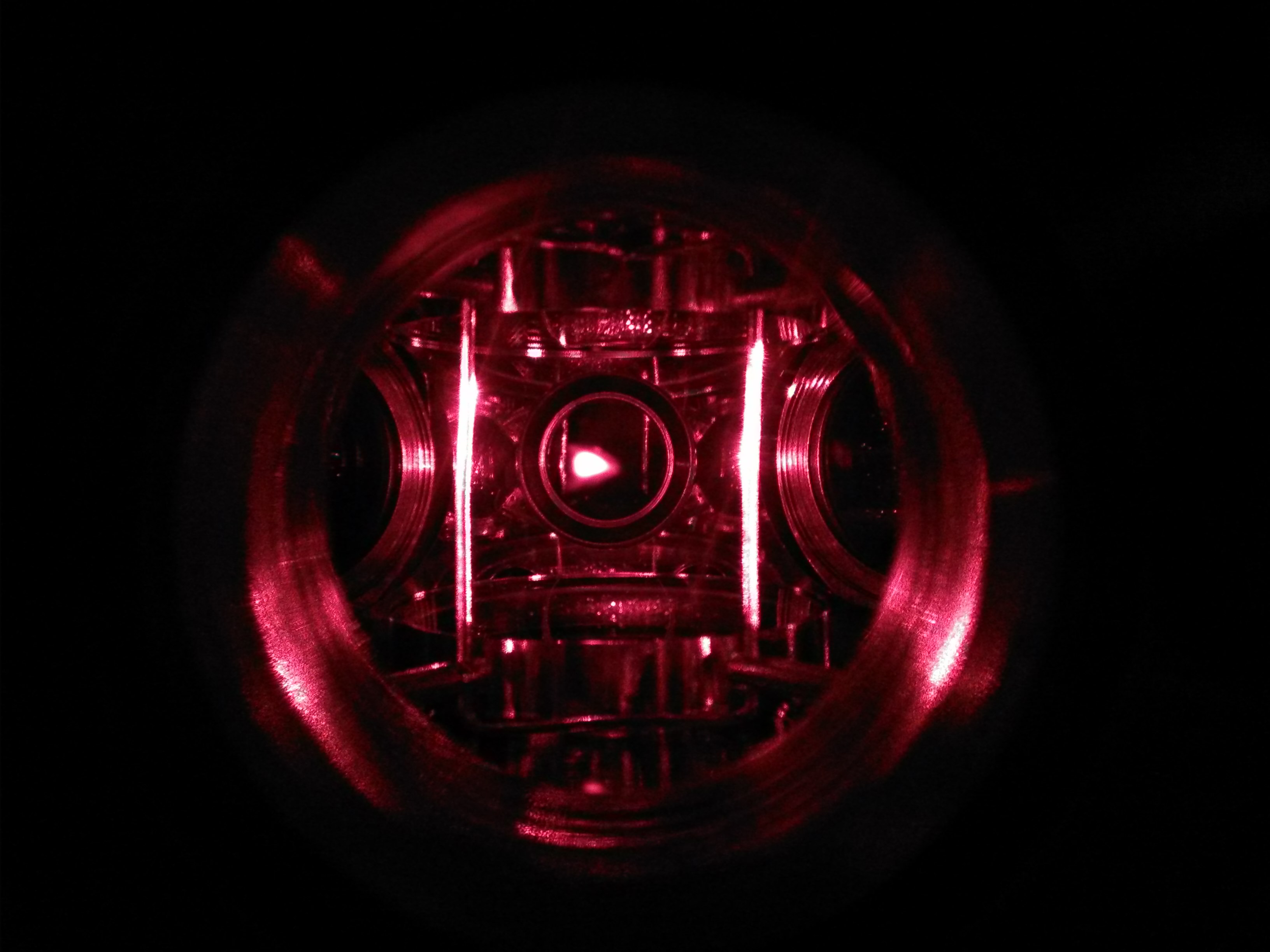